Though pollution and overuse are damaging corals, their biodiversity offers hope for their future. 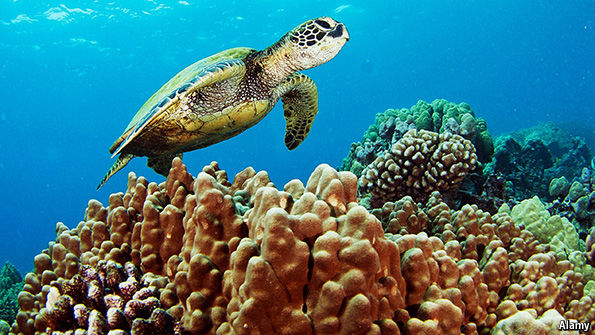 The waters off the Hawaiian island of Oahu are visited each winter by migrating marine mammals such as humpback whales. All year round they are home to much smaller animals that form vast reefs: corals. Intricate pink structures stand out amid contortions of vegetable-green ones; dark-striped fish flit among them and turtles hover above. Corals lay down limestone skeletons of different shapes and sizes: branching types like small trees; ground-huggers spreading squat.

The colours that lure snorkelling and scuba-driving tourists are produced bysingle-celled algae that grow symbiotically in corals’ tissue. These use carbon dioxide respired by their host to make oxygen and carbohydrates through photosynthesis, giving corals most of the energy they need to form their skeletons. But this delicate balance is threatened by humans, both in the short term and over the coming years.

Overfishing, tourism and pollution are the most immediate perils, disrupting reefs’ ecosystems and the ability of corals’ algae to photosynthesise. In the longer term, rising levels of greenhouse gases in the atmosphere will hit reefs in two ways. Oceans absorb about 30% of carbon dioxide emitted into the atmosphere, which makes them more acidic; as concentrations of carbon dioxide in the water rise, it will be harder for coral skeletons to calcify. And as oceans warm, corals will lose their colourful algae, which can only cope within a narrow range of temperatures. Reefs will be reduced to bleached-looking skeletons, vulnerable to disease.

Only twice before has such bleaching occurred worldwide. The first time coincided with El Niño in 1997-98, the world’s largest climatic phenomenon, which causes surface temperatures to soar in the Pacific Ocean. The second was in 2010. A third is now under way. About 16% of corals died in the 1997-98 disaster. The current bleaching event, once more occurring alongside a Niño, may have affected 38% of the world’s corals. Conditions now may offer a foretaste of the damage climate change could wreak on these already vulnerable ecosystems.

The harm before the storm

Coral reefs are found from the Middle East to Australia and America. They cover less than 0.1% of the ocean floor. But their importance is far greater than that figure suggests. They protect 150,000km (93,000 miles) of shoreline in more than 100 countries and territories by acting as coastal buffers, enduring the brunt of high waves and rough weather. They also support perhaps a quarter of all marine species, and act as nurseries for many others. In South-East Asian waters, the richest reefs are in the “coral triangle” (see map). This area of 86,500 square km holds two-thirds of the world’s coral species and more than 3,000 species of reef fish—twice as many as are found anywhere else.

In the past half-century, though, these beautiful, biodiverse structures have been put under pressure by human activity. About a quarter of all coral cover has died. The reefs that are in worst shape are those off the most crowded beaches. “People don’t leave enough time for their sun cream to soak in, so it gets in the water,” says one deckhand with Eo Wai’anae Tours, which organises boat trips off Oahu.

More damage is caused by fertiliser-rich run-off from farms, leading to algal blooms which block light the corals need. Fishing near reefs cuts the number of herbivorous fish, allowing vegetation to grow out of control. Some fishing methods are particularly harmful: for example, blast fishermen in Colombia, Tanzania and elsewhere use dynamite to stun and kill fish without regard to the harm done to nearby reefs.

Crown-of-thorns starfish, coral-chompers that have proliferated in some areas, including Australia’s Great Barrier Reef, add to the stress. In the South China Seaisland-building and fishing for giant clams are crushing some reefs beyond the possibility of recovery (see article). The World Resources Institute, a think-tank, estimates that about 60% of reefs face such immediate threats.

The bounty that reefs provide accrues to those living near them, and in the short term. Without strong property rights, the result is an unfolding tragedy of the commons, in which fishermen and tour operators destroy the resources they rely on.

Tourism generated by the Great Barrier Reef is worth about $4.6 billion annually to nearby Queensland alone. Australian bigwigs bent over backwards last year to keep the UN from listing the reef, a World Heritage Site, as “in danger”. Estimates suggest that the economic value of Martinique and Saint Lucia’s corals comes to $50,000 per square km each year, thanks largely to tourism. But overdevelopment threatens the reefs the visitors come to gawp at. Sediment from construction clouds waters, burying corals and blocking the light they need. Hotels close to the shore may be convenient for tourists, but the process of building them can kill the reefs that snorkellers like to swim over.

The mix of problems varies from place to place, meaning policies must be locally tailored to tackle them. But even when governments and environmentalists focus on the long term, the need to limit fishing means they often struggle to craft policies that do not cause immediate harm to poor people. The three countries with the largest numbers of people who fish on reefs are all in the coral-triangle region: Indonesia, Papua New Guinea and the Philippines. In Indonesia and in the Philippines, up to 1m people’s livelihoods depend on reefs.

Averting a tragedy of the commons means agreeing which activities should be restricted and enforcing the rules. For coral reefs—and other biodiverse marine environments—the usual approach is to give ecologically sensitive areas special status under local or regional laws. In such “marine protected areas” (MPAs), activities that are deemed harmful, such as fishing, drilling and mining, can then be restricted or banned, with penalties for rule-breakers.

The Aichi targets, agreed in 2010 under the UN Convention on Biological Diversity, seek to reduce “anthropogenic pressures” on coral reefs to “maintain their integrity and function”. The aim is to have at least 17% of inland water and 10% of coastal and marine areas under conservation by 2020. Most countries have signed up. But the targets are far from being met. Less than 3% of the ocean’s surface is within an MPA.

The most urgent action is needed close to shore. The nearer humans are to reefs, the worse their effect on the fragile ecosystems. A global register of fishing vessels, long under discussion, would also help identify wrongdoers. And beefing up the UN law of the sea could inspire further action. Decades old, it has little to say about biodiversity.

But simply declaring an area protected does not make it so. In 2009 George Bush junior, then president of America, established three national marine monuments in the Pacific, including nearly 518,000 square km of coral islands and surrounding areas. Their remoteness makes it hard to stop vessels entering illegally; Hawaii’s coastguard is already stretched.

Satellites are sometimes used to police MPAs, but they pass over infrequently. In the future, sailing robots could play a larger role. America’s National Oceanic and Atmospheric Administration (NOAA) has been working with a private firm, Saildrone, on hardy models equipped with carbon-fibre fins. They cost less than $500,000 each and can roam remote ocean regions for months, making them far cheaper than manned boats.

Such drones could photograph rogue fishing vessels, obtaining hard-to-gather evidence for any criminal proceedings. And they could carry out other useful work at the same time, such as monitoring ocean temperature and acidity or tracking tagged members of endangered species. Saildrone plans to provide its robots as a service, so that universities and other cash-strapped organisations do not have to buy one outright.

Richer countries are better able both to administer and to enforce MPAs. Three-quarters of coral reefs in Australian waters are in MPAs, but only 16% of those within the coral triangle. “It is difficult to ensure systematic monitoring,” says Rusty Brainard of NOAA, who has advised marine scientists in the region. Indonesia has more than 17,500 islands, he points out.

In poor parts of the world, low-tech methods of surveillance are needed. Just 0.09% of Malaysia’s territorial waters, and those within its exclusive economic zone, are protected by an MPA. But a national programme requires fishermen to paint their vessels according to how far out they have permission to fish within the nearshore area. Other fishermen can then spot when a rogue vessel has strayed, even if they cannot read. And as boats require regular painting anyway, little extra cost falls on their owners.

Public-private partnerships could also help. A pilot project in Barbados, supported in part by local hoteliers and tourism organisations, will charge visitors to enter a coastal MPA managed by Blue Finance, an alternative-investment outfit with support from the UN Environment Programme (UNEP). About $1m was needed to set up the area; its upkeep will require half that each year. “We find private investors who don’t mind if their returns are a little below market rates because they are benefiting Barbados,” says Nicolas Pascal, an environmental economist who directs the company.

Other pilots are under way in Colombia and Martinique. But more backers are needed. According to research conducted under the Convention on Biological Diversity, investment will need to quintuple for the Aichi targets and other conservation goals to be met.

The effectiveness of marine reserves is hard to measure. Reefs are complex, ancient systems, and the effects of better policies will become known only gradually. “You can’t manage ecosystems: you can only manage the impact of humans upon them,” says Jerker Tamelander, the head of the reef unit at UNEP.

Even if the right policies are adopted to keep corals healthy in the immediate future, longer-term threats loom. Neither oceanic warming nor acidification can be kept out by an MPA. And both may be happening too fast for corals to adapt, especially as recent global climate deals will not slow them much. Back slaps and handshakes accompanied the inclusion of an aim to limit global warming to just 1.5°C above pre-industrial levels in the Paris Agreement last year. But only an incorrigible optimist would bet on that aim being achieved. And even if it is, that much warming could breach the environmental limits within which most reefs can thrive.

So researchers are turning their attention to ways to help corals cope. Their global diversity, scientists hope, may hold the key. The same coral will grow differently under different conditions: corals of the western Pacific near Indonesia, for example, can withstand higher temperatures than the same species in the eastern Pacific near Hawaii. Such disparities can be found even quite locally. In Kane’ohe Bay, where the Hawaii Institute of Marine Biology lies, 70% of some reef patches has been bleached in the current event. Others, less than 200 metres away, suffered bleaching to just 40% of their corals.

The characteristics that help some reefs survive unusual conditions could allow others to endure climate change. But tough corals from one place cannot simply be transplanted to another. So a team at the Hawaii Institute of Marine Biology is in the early stages of engineering reef ecosystems, with $4m from the Paul G. Allen Foundation, a charity set up by Bill Gates’s former business partner.

Organisms respond to environmental changes through both genetic processes (adaptation) and non-genetic ones (acclimatisation). With corals, the nature of their symbiotic relationships can also alter. So selectively breeding and conditioning them, and investigating whether certain types of algae confer resistance to heat or acidity, could create hardier varieties faster than they would develop naturally.

These could then be used to repopulate ravaged reefs—once more is known about how and where to transplant them. “We’re assisting evolution,” explains Ruth Gates, who leads the research. Her team aims to help corals withstand changing ocean temperature and chemistry. Despite all her effort, she says: “if the tools we develop are never used, I would be the happiest person in the world.”

CORRECTION: In an earlier version of the map accompanying this article, some of the marine protected areas displayed were incorrect. This has now been rectified.