World Oceans Day In The Caribbean: A Story In Images by (Forbes.com)

Despite the small size of the islands that frame it, the Caribbean sea, at over 1,063,000 square miles, is one of the largest seas in the world and is home to the second largest barrier reef, the Mesoamerican Barrier Reef, and the largest reef system in the Northern Hemisphere.

Coastal communities and over 116 million coastal dwellers in the region rely on the Caribbean sea for various reasons. With so much more water than land under its jurisdiction (Jamaica alone has jurisdiction over waters 23 times greater than its land mass) the region’s bond to the ocean is inextricable.

What does this precious resource mean to the people of the Caribbean? Here is their story in words and images.

“I give fish locks to talk about”

“It’s hard to tell where my locks end and the ocean begins,” joked Barbadian marine biologist and activist Angelique Brathwaite before she cut off her famous locks. Angie, as she is called, is the Regional Director of Blue Finance, an organization that specializes in investment solutions for marine conservation and climate change resilience in the region. Angie firmly believes that the ocean binds the people of the region to their natural environment. “We are family, the fish and the people of the Caribbean,” says Angie. “Let’s act that way.” 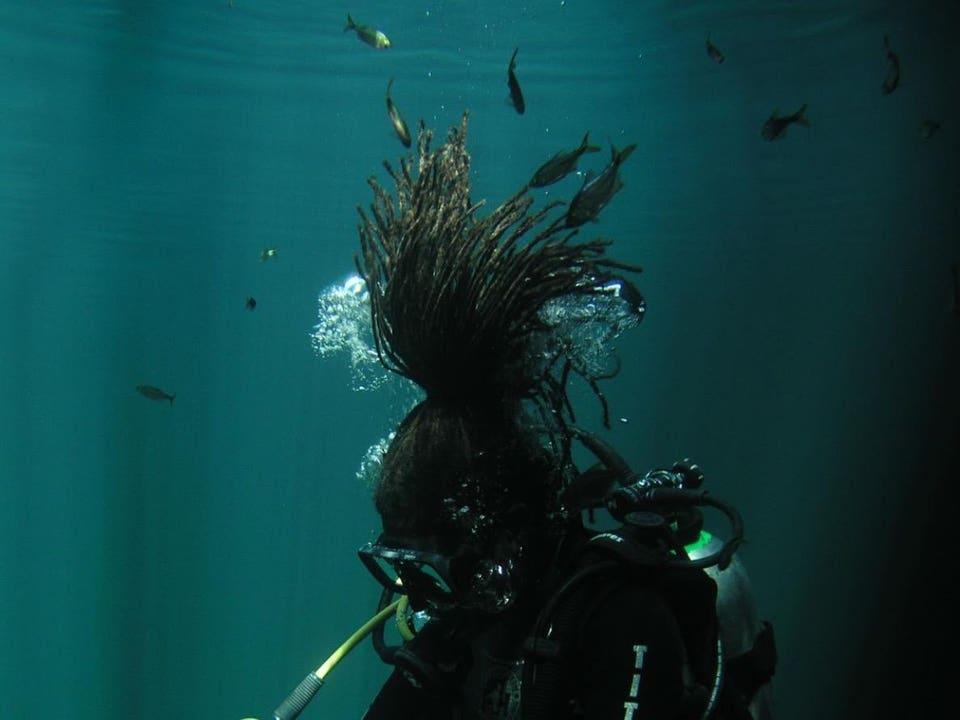 “Every day is World Ocean’s Day”

“For me, every day is World Ocean’s Day,” says marine biologist, Nikola Simpson. “The ocean inspires me. It’s where I work and it’s where I play.” Simpson is no different from the millions of people who call the Caribbean their home and regard the ocean as their playground. The Caribbean is a significant source of inspiration for art, music, carnival, literature, hobbies, games, food, social events, politics and the economy. “It is interwoven with everything I do,” says Simpson. 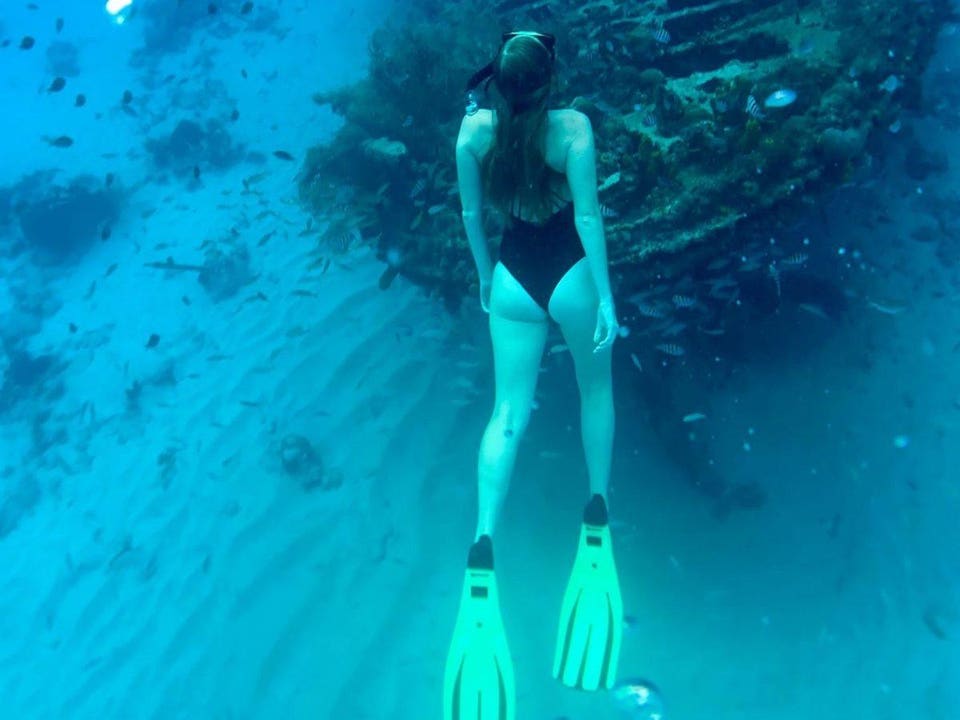 “A major component of our tourism product”

Smuggler’s Cove is a hotspot for tourism activity in St. Lucia and “a favourite beach from my childhood,” says writer, photographer and editor, Finola Jennings Clarke. “Now it has been appropriated by a small hotel, but even though so much space is taken over, it remains a place where I go for quiet time. There’s always a bit of a wave, making the sea like a soothing massage; the rocks, though not as full of life as they were 30-plus years ago, are still an endless source of enjoyment with tiny fish, camouflaged crabs and all sorts of treasure waiting to be noticed.”  In the Caribbean, tourism accounts for at least 14% of regional Gross Domestic Product (GDP). For most countries it is the primary economic sector, with 25 million visitors contributing $49 billion towards the region’s gross domestic product in 2013. The ocean and Caribbean tourism are inextricable. 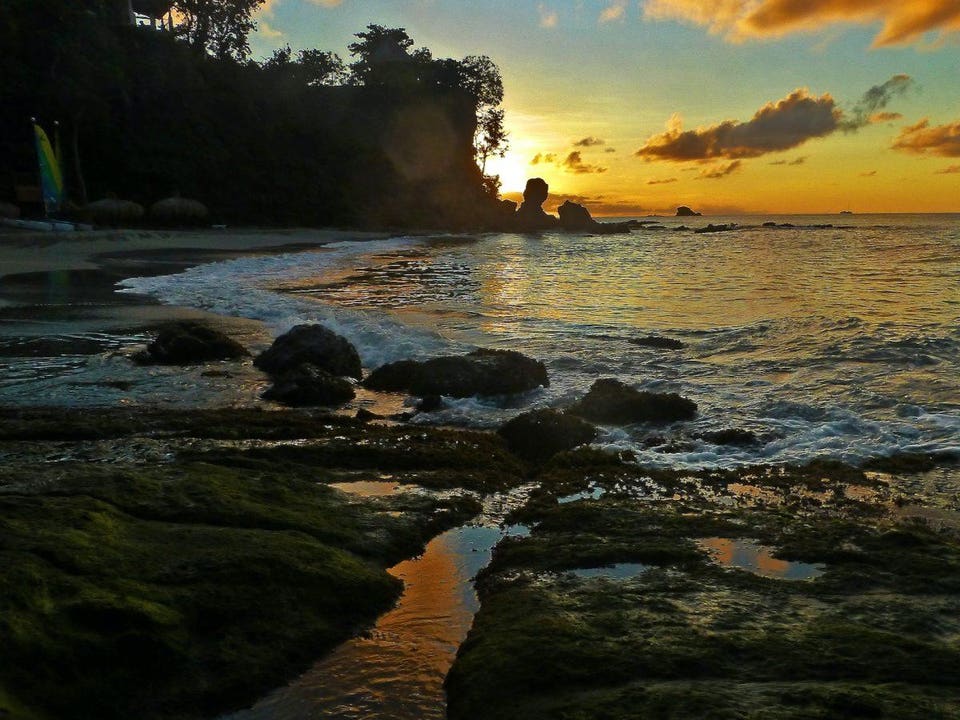 “A source of innovation”

“The ocean offers an opportunity for community development and climate change adaptation through innovation,” says Johanan Dujon, Founder of Algas Organics. The biotech company employs workers from coastal communities in St. Lucia, who gather significant amounts of sargassum seaweed that wash up on local shores, impacting the livelihoods of fishermen, affecting marine life and threatening the country’s tourism product. This sargassum is then delivered to Algas’ labs and is converted to organic fertilizer that is sold on the local and international market. “A thriving ecosystem and habitat to a variety of marine species”

“I love finding these brightly coloured chaps on a dive although they are rarely seen out of their hide holes,” says Antiguan photographer, Jason Pickering.  “They have specialised calcified “clubs” that can strike with great power, to attack and kill prey by spearing, stunning or dismembering, earning them the names  “prawn killers” and “thumb splitters” because of their ability to inflict painful gashes if handled callously.” According to the Census of Life Marine Program for the Caribbean, the region is home to 12,046 marine species; the Caribbean also contains the greatest concentration of marine species in the Atlantic Ocean. 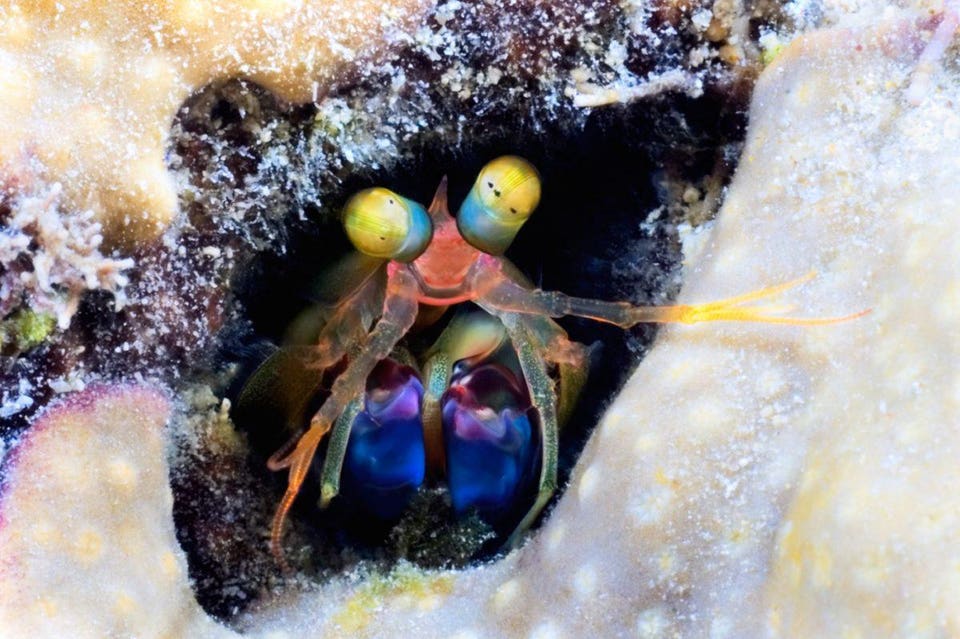 “A unifier of families and a source of food”

“As a mother, the sense of unity and togetherness of the Jacksons, a father-son trap fisher team that I had the pleasure of working with as a fisheries biologist in Caracol Bay in Northern Haiti, was inspiring,” says Caroline Bissada, Director of the Eastern Caribbean Conservation Organization. “They wake and set out before the sun rises and row for over two hours or 6 km to the nearest coral reef. They set and haul mesh, homemade traps for the next 3-4 hours and then sail back home on their boats of makeshift sails and bamboo. When they return, they feed their family first and use the surplus to earn money. Mr. Jackson and his son have noticed that due to climate change, there have been fewer and smaller fish. Coastal communities depend on fish for their food and livelihoods.” 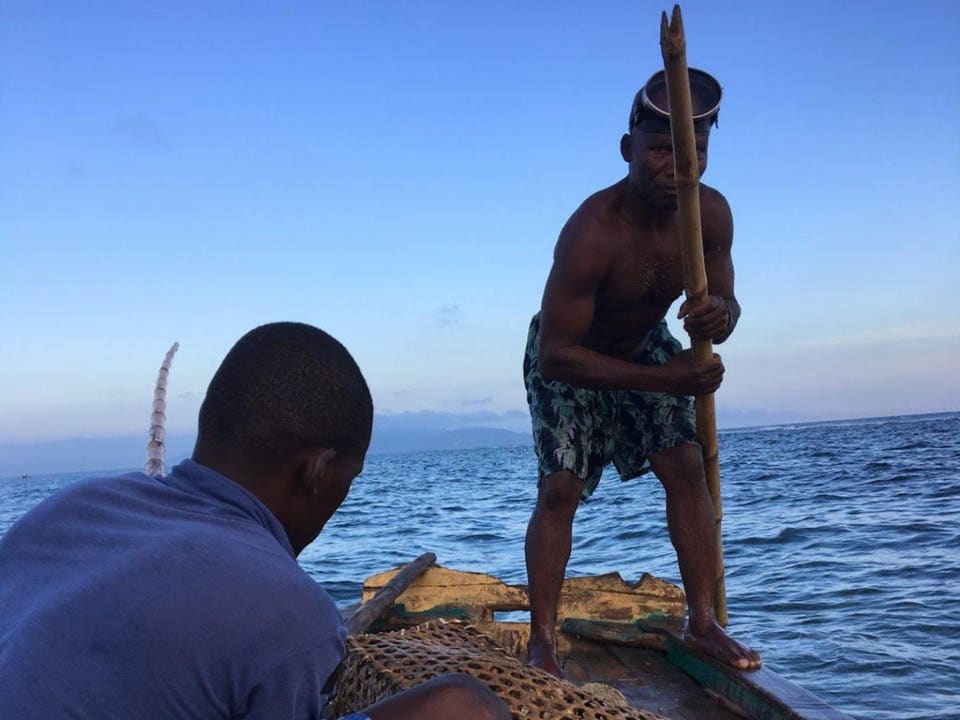 “A source of livelihood”

“I love to watch fishermen looking for catch from my patio in Batts Rock on the West Coast,” says Barbados-based artist, publisher and photographer, Corrie Scott. In Barbados, the fishing industry provides employment and income, directly and indirectly, for an estimated 6,000 people and according to UNCTAD, the contribution of fishing to the Barbados Gross Domestic Product (GDP) is cited as ranging between $12-16 million per year. 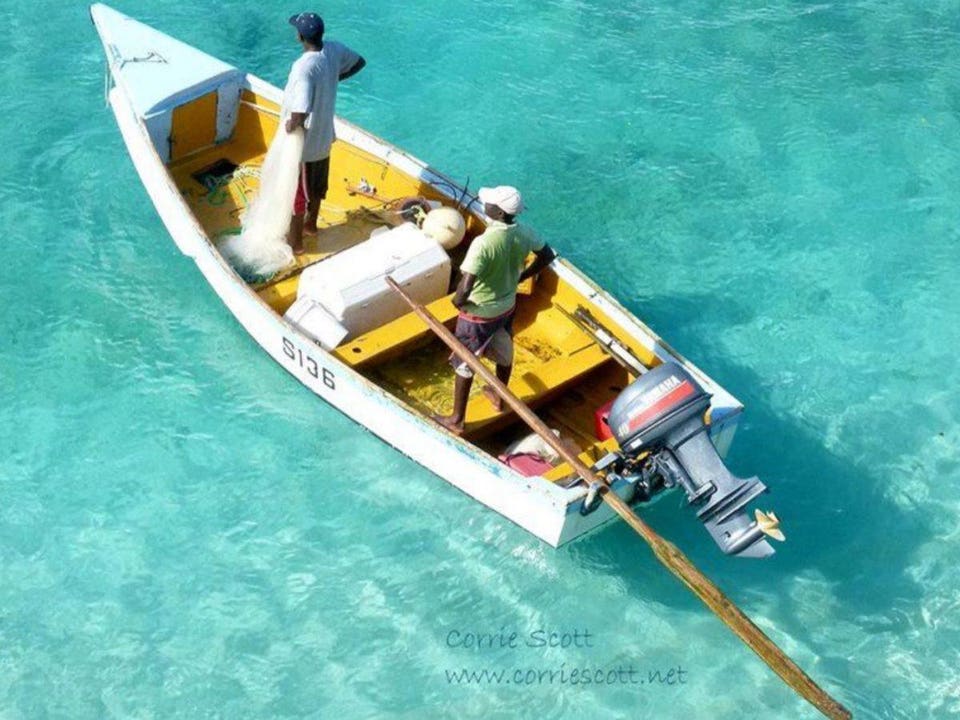 Fisher folk off of Batts Rock in Barbados – CORRIE SCOTT

“A hotbed for conservation activities”

“We don’t have any time left to pause and consider the impact of land-based activities on our coral reefs. We need to act,” says Kate Holden, Director of Advancement of the Central Caribbean Marine Institute in the Cayman Islands. “We are actively involved in setting up coral nurseries in the Cayman Islands so that we can enhance the bio-diversity of our reefs.” Marine biologists have predicted that without adequate intervention, all reefs will be dead by 2050. In response to this prediction, CCMI will be spreading the love for healthy reefs, by engaging the global community in the healthy reefs challenge. Everyone can get involved. 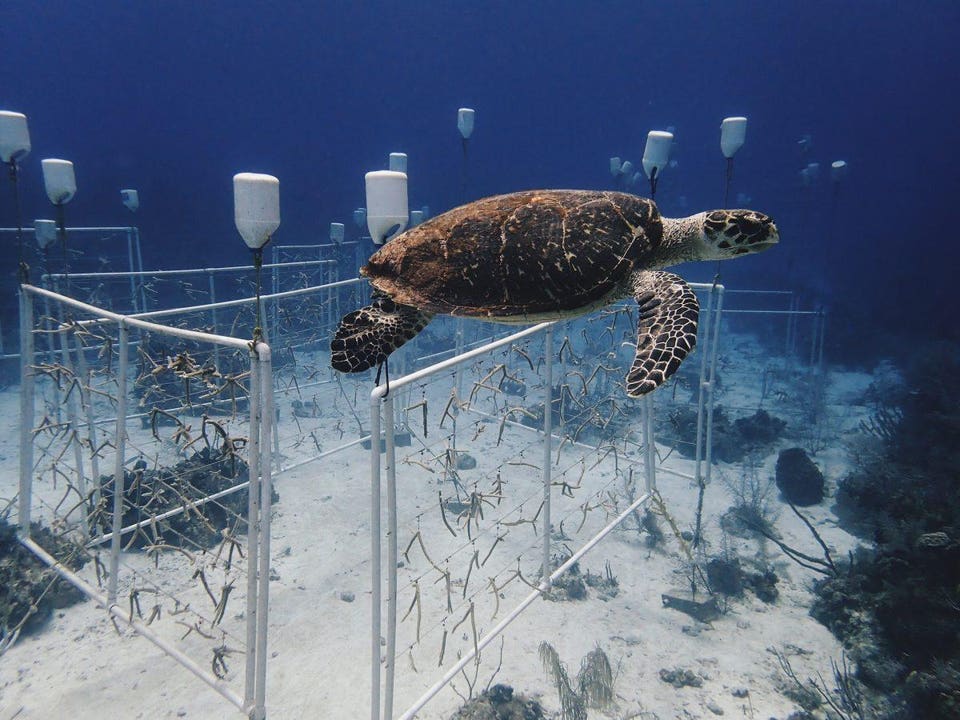 A turtle paying a visit to one of the CCMI’s coral nurseries in the Cayman Islands. CENTRAL CARIBBEAN MARINE INSTITUTE

“The vulnerable victim of climate change”

“The fishing industry is a significant contributor to the economy of the Soufriere/Scotts Head coastal community in Dominica, but it was massively impacted by Hurricane Maria in 2017,” says Iris Monnereau, Regional Project Coordinator for the CC4FISH (Climate Change Adaptation of the Eastern Caribbean Fisheries Sector) Project at the FAO Subregional Office for the Caribbean. “It was so emotional for me to visit the community for the first time after the island had been hit, and witness first-hand the impact that climate change-induced severe weather can have on local communities, but I was also so impressed with the people of Dominica and their ability to work together to rebuild.” Dr. Monnereau and her colleagues at the Food and Agriculture Organization have found that the fisheries sector in the Caribbean is the most vulnerable to climate change in the world. 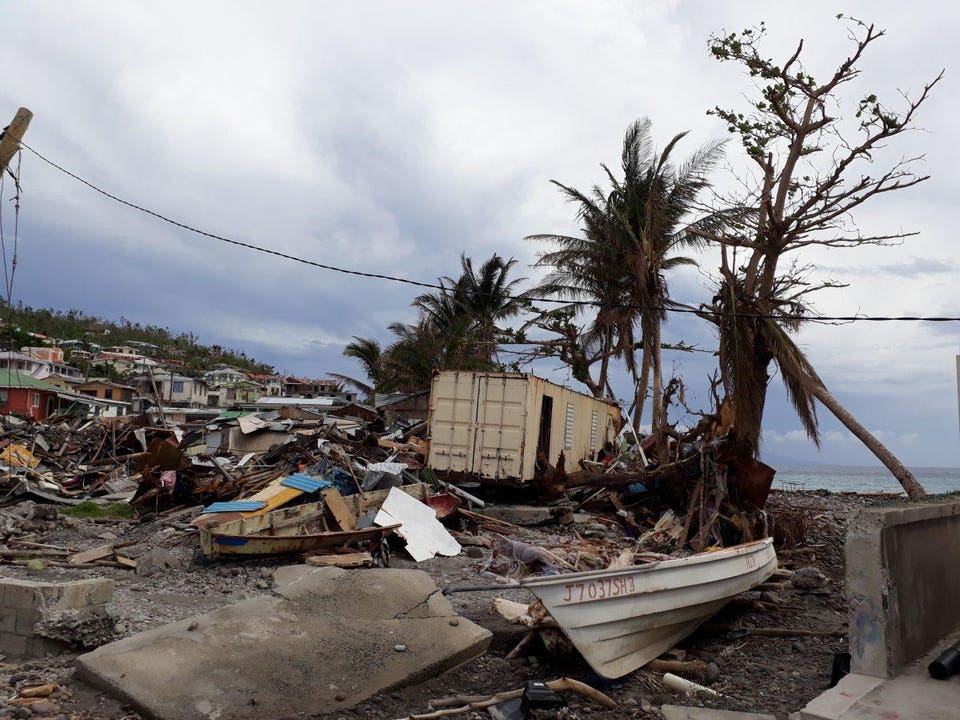 The aftermath of Hurricane Maria in 2017. IRIS MONNEREAU

“My marine work always brings me in contact with fascinating people,” says Jamaican environmental scientist Rachel Allen. “Pirate Rob, self-appointed Captain of the Sea, was one individual I’ll never forget. He swam before he walked and spends more time on the water than land.” 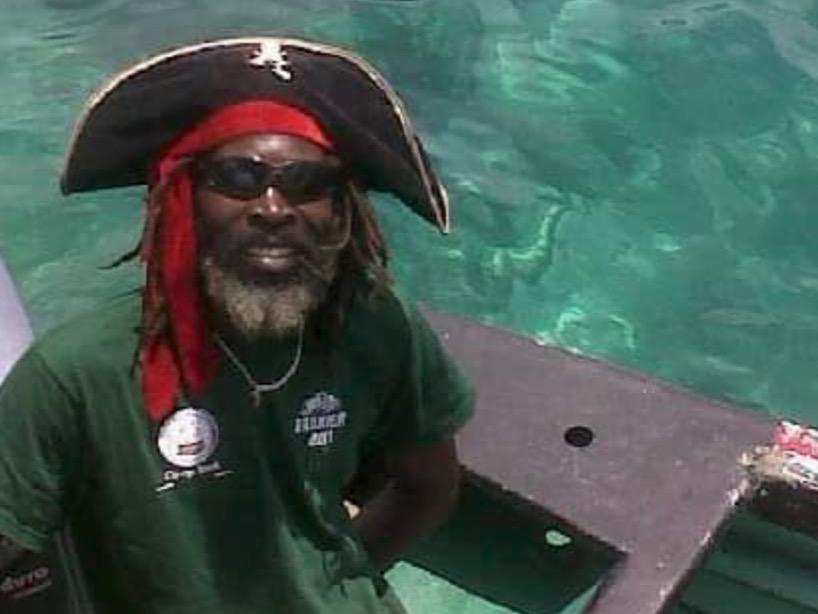 And finally, here is an image of my daughter and I participating in the Reef’s Go Live CCMI World Ocean’s Day event at Camana Bay in the Cayman Islands. For my family, the ocean is a source of unity and togetherness. 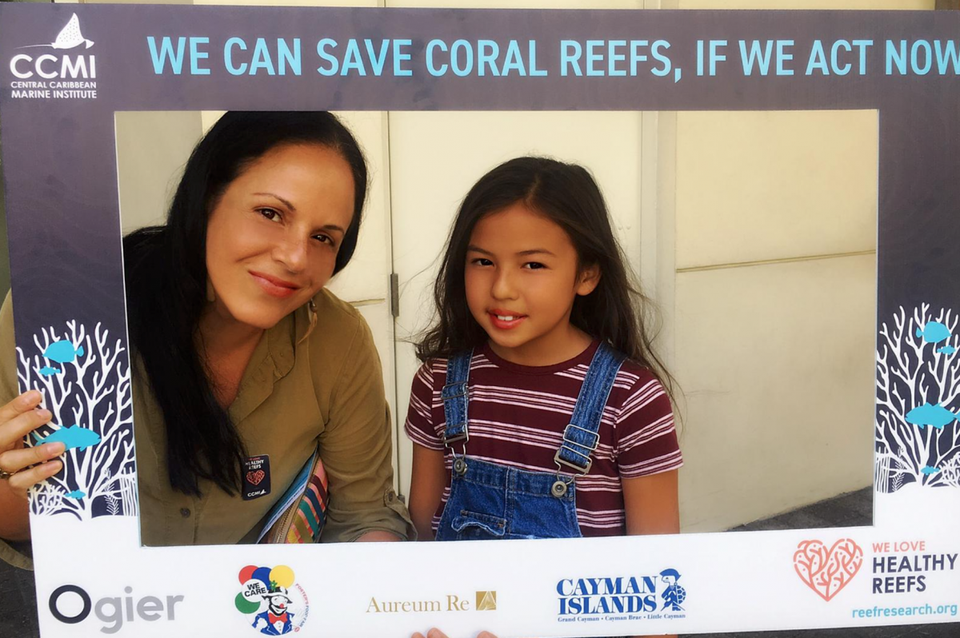